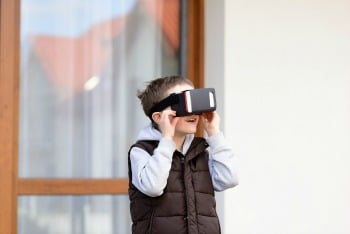 Augmented reality (AR) technology allows computer-generated data or imagery to overlay physical objects in real time. It provides users with information they need to perform tasks in the real world. AR works hand in hand with displays, sensors, and embedded electronic components. An example of AR technology is smart glasses — a wearable computer that adds information to what the wearer sees — such as the R-7 created by the Osterhout Design Group, which allows surgeons to examine X-rays from multiple angles and view patient's bones in greater detail, among other uses.

Virtual reality (VR) provides users access to a fully immersive virtual environment where they can interact with objects similar to those in the real world. VR technology works on components such as gesture recognition, sensors, and embedded electronic components. An example of a VR product on the market today is Google Cardboard, which allows users to turn an Android phone into a VR headset using a simple fold-out cardboard viewer.

Rapid growth in these areas is tied to two main factors: consumer interest and technology adoption. Many companies have been quick to recognize the potential for AR and VR technologies. Microsoft Corporation, Oculus VR, and Samsung Electronics are currently developing head-mounted displays (HMDs). In addition, media companies such as NBCUniversal, Turner Sports, and 20th Century Fox are experimenting with new formats and producing VR titles.

A broad range of industries will be influenced by advancements in AR and VR including consumer goods, entertainment, aerospace and defense, commercial, and medical.

In consumer goods, applications for augmented and virtual reality are endless. Not just in video games, which is the first thing most think of when picturing VR, but also in sectors such as sports, gaming, and entertainment applications. In the article "Could Virtual Reality Revitalize the Economy?" Brian Shuster describes the potential for VR to take users to the 50-yard line at the Superbowl, front row to a concert, and a trip to an amusement park, all from the comfort of your own home. The uses for these technologies will open up brand new ways to purchase and experience entertainment.

AR and VR also play an important role in the defense sector. AR displays can provide operators with crucial parameters such as speed, altitude, direction, orientation, object and people markers, and even weapon information. Similarly, VR can be used for training and provide trainees with real-life situations they will come in contact with.

When it comes to AR and VR, the commercial sector can be broken down into tourism and sightseeing, e-learning, and e-commerce and marketing. VR can create virtual environments that demonstrate and display products for promotion and branding, immersing consumers into the products. In addition, augmented reality can sell products in a whole new way, such as helping women see how the makeup will look on their skin without having to try it on. The potential for VR in education is also enormous and could transform the way students take online classes.

Lastly and perhaps most importantly, are the potential uses for AR and VR in the medical and healthcare industries. The medical vertical has one of the most important and practical applications of AR and VR such as helping doctors to conduct surgeries effectively, improving fitness, and teaching complex subjects to medical students. VR is also used in the treatment of pain, depression, and phobia, according to a report by Occams Business Research & Consultancy. As time progresses, it is expected that healthcare applications will incorporate AR and VR more and more.

As with most emerging technologies, AR and VR technologies still have obstacles to overcome. Many consumers still view AR as an end to personal privacy. The applications are also designed in such specific ways that they cannot be used for multiple purposes, potentially limiting users. VR has not completely gone wireless yet, requiring cables and accessories and making users stationary for long periods of time.

A big problem is also potential health side effects. VR has been known to have display issues that cause effects such as irritation, nausea, and other problems. Similarly, it is still unknown what type of long-term medical illnesses can be associated with AR hardware such as Google glasses.

As new technological advancements and uses for AR and VR emerge, we will see this industry continue to evolve. To learn more, check out all of our related market research reports.