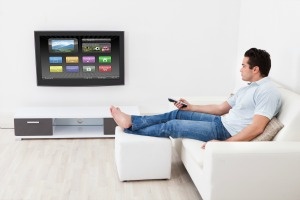 Advancements in technology have allowed manufacturers to develop and sell devices with the abilities to do just about anything. In 2015, we were introduced to the iWatch, a hoverboard, and 3D printers in our homes, but what’s in store for 2016? Follow along in this blog to learn about five technology trends that will drive the consumer electronics market in the coming year.

Smart devices are becoming more intelligent with the help of language processing, IoT, and advanced applications. These devices are starting to get a better understanding of the context in which they operate and how they operate with other devices. With smarter devices comes more relevant data that users want — and the ability to deliver information quicker than ever.

As more sensors are added to devices, a digital representation of the world around us is being developed. All these sensors are working to collect and communicate data which allows devices to predict the patterns in our lives.

This year, we saw drones of all shapes and prices being offered to consumers. But the drones we are seeing in stores right now are just the beginning of what’s to come. Companies are working on advancements and features such as drones that avoid collisions, drones that can carry heavier weights, and even drones that can farm.

According to a report by MarketsandMarkets, the relaxations in government policies and the increase in the number of exceptions granted to companies for the commercial use of UAV drones is creating a market that is expected to witness prominent growth through 2020. However, over-regulation of UAV drones is still a major concern for developers. The convergence of safety, security, and privacy are still key factors that will play a part in the future of drones.

Smart watches are still carrying this market, with 11 million shipped in 2015. Publisher Tractica forecasts that annual smart watch shipments will reach $94.9 million in 2020, representing a compound annual growth rate (CAGR) of 71 percent between 2013 and 2020. The options for wearable devices has become huge. Retailers offer fashion wearable devices, activity devices, and even health tracking devices. But what we see now is going to change. New and more affordable sensors in future wearables are going to make today’s wearables obsolete. Decreases in prices will allow more consumers to have access to the devices they need and want most.

When people think of virtual reality (VR) their minds quickly jump to video games. Currently, there is a lot of hype around VR and gaming, but the options for VR and augmented reality (AR) is also being named “the next big thing” in consumer technology. According to publisher TechNavio, between 2014-2019 the global VR market is expected to grow at a CAGR of 96.09 percent.

According to many companies, most of the devices in our homes are ready to be connected through IoT. Samsung Electronics CEO Boo-Keun Yoon said that 100 percent of its products will be connected to the internet within five years. With that in mind, many wonder what circumstances will need to be in place to allow consumers to use all these smart appliances and devices in their home.

The number one concern when considering smart homes is cost. Prices will have to decrease significantly if smart homes are to become the norm. Also, consumer education, ease of use, and installation will need to reach a common standard.

As we enter the new year, it will be exciting for businesses and consumers to see how technological advancements influence the market. To learn more about tech trends, browse our reports on consumer electronics.