Artificial Intelligence in Cars: What to Expect from 2017 to 2021 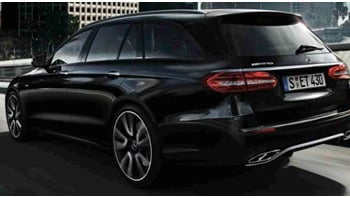 By 2021, all the new personal vehicles being sold will have autonomous capability, which has the potential to increase performance and safety dramatically.

Autonomous cars will also be used for ride sharing. Ride sharing in cities is sure to grow more popular as the price decreases because there is no human driver. This represents a new and rapidly growing market based on self-driving cars with artificial intelligence. Any chance that personal cars and light truck vehicles will be replaced by Uber-type ride sharing seems highly unlikely, however. People like their personal vehicles, the performance, the convenience, and the privacy. As Tesla has shown, the autonomous performance vehicle is very appealing to people.

Bundles of sensors are the eyes and ears of the autonomous car. Maps are one of the most important innovations to make sense of the various info streams, from navigation and points of interest to live weather and traffic data.

Artificial intelligence in transportation has been around a long time. Airplanes already land themselves. Autonomous cars represent a further step on the road to autonomous transportation. The Daimler E-Class is the world’s first production car to be issued a test license for autonomous driving. It is certified in Nevada in the United States. This came about without having to undergo a hardware modification. Only the software has been slightly changed.

Google and Tesla are the market leaders in cars on the road and longevity for testing vehicles. Apple, Amazon, and Uber represent tech companies in the business. All the auto manufacturers have partnerships and suppliers that provide artificial intelligence capability for cars, light trucks, and SUVs.

A new study from WinterGreen Research, Inc. titled Artificial Intelligence for Cars and Light Trucks: Market Shares, Market Strategy, and Market Forecasts, 2017 to 2023 details the evolution of the new market. Following is a scrubbed sample from the study. To view the full data set, download the AI in cars study on MarketResearch.com. 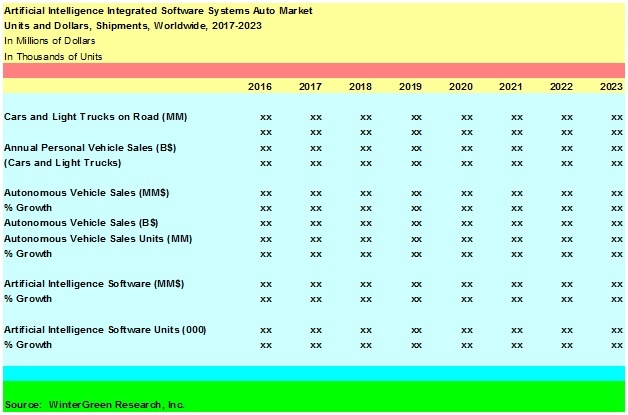 Until now, partially autonomous driving and automated parking have been relying on artificial intelligence (AI) working at the highest level of sophistication. Mercedes-Benz is setting standards for autonomous driving with the new E-Class. The model is equipped with numerous intelligent assistance systems that support drivers in a way that’s never been done before. This support reduces drivers’ stress levels. It makes driving more enjoyable and increases driver attentiveness, thus benefiting everyone on the road. Innovative assistance systems are at the heart of the automated E-Class.

The artificial intelligence (AI) enables the car to automatically maintain an appropriate distance from vehicles ahead at a speed of up to 210 km/h. The car automatically recognizes speed limits. Drivers no longer need to operate the brake or gas pedals, and they receive steering support. Due to legal and other requirements, drivers must keep their hands on the steering wheel during all automated maneuvers.

Swarm organization reduces stress. In a swarm, the E-Class takes surrounding vehicles and parallel structures into account. Electronic assistants can actively intervene even if road markings are unclear or nonexistent. The system makes things easier on drivers, especially in heavy congestion and traffic jams.

Lane changes are also made easy. The E-Class uses state-of-the-art radar and camera technology to leverage artificial intelligence (AI) in a manner that assists the driver when changing lanes on multi-lane roads. Systems work when overtaking traffic. Once the driver has activated the turn indicator for at least two seconds, the artificial intelligence (AI) system helps steer the vehicle into the desired adjacent lane, provided it detects that the lane is not occupied.

Airplanes land themselves better than a pilot can, as proved recently. Autonomous cars, leveraging artificial intelligence, represent a further step on the road to autonomous transportation.

Get the Full Report

To learn more about this fast-growing market, see the comprehensive 826-page report by WinterGreen Research, which features:

For additional insights into the disruptive trends within the automotive industry, download the white paper "Will Self-Driving Vehicles Be a Reality by 2025?" Click the button below to learn more about this free resource.