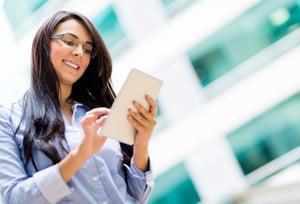 With the evolving technology, the display resolution also changed from standard to high-definition, and eventually to ultra-high definition.

E-paper display technology comprises various features that can easily outweigh the use of LCD in commercial and public spaces. LCDs are bulkier, heavier, and consume a considerable amount of energy as compared to e-paper displays. E-paper displays offer several benefits over its contemporary counterpart, such as low cost of manufacturing and final retail value, minimum power consumption, daylight readability, foldable screen, and custom manufacturing.

Although the application of LCDs and e-paper displays vary based on resolution, content, and brightness, e-paper displays have a wide range of applications in integration with wearable devices, retail marketing and advertising, packaging, decoration and interior designing, education, and smart homes. As display systems hold a significant market share in the consumer electronics sector, most consumers tend to adopt the latest and most advanced display systems such as LED and OLED.

Although the e-paper display technology is gaining traction in the commercial and public sectors across the globe, the displays lack color richness and video capabilities, which pose a challenge for the growth of the market. Currently, several manufacturers and distributors of e-paper displays are conducting extensive research and development to resolve these limitations and further expand the product functionalities, thereby making it a more lucrative option for end users.

Although it is difficult for e-paper display technology to replace LCDs completely as their applications vary significantly, the former can be ideally used for displaying static information, and marketing and advertising. Moreover, the ongoing research on batteryless e-paper displays is expected to improve product usability and increase adoption among consumers.

How Do Vendors Progress in the E-Paper Display Market?

For the same reason, the information about certain basic requirements, such as active display area, pixel density, bezel size, the location of driver electronics, and overall product size and dimensions, is collected from the customer and is reflected in the end product to suit the specifications of end users such as automotive, retail, and media & entertainment, among others.

These companies undergo partnerships and agreements to establish a strong and prominent presence and stay relevant in the ever-changing e-paper display market.

The 100-page report Global E-Paper Display Market Research Report Forecast to 2023 provides a detailed analysis of the market structure along with a forecast of various segments and sub-segments in the global market. The report also provides insights into factors affecting market growth and profiles of top companies.

Market Research Future publishes reports that focus on products, services, technologies, applications, end users, and market players for global, regional, and country-level segments. This enables clients to see more, know more, and do more and  — get answers to their most important questions.