The global aircraft manufacturing market will grow at an annual rate of 9.5% to 2021, according to a new report from The Business Research Company. Driving the market is the increasing use of drones together with the rising demand for turboprops.

Legal authorities have been allowing the extensive use of drone technology for commercial use. For example, in August 2016 the US Federal Aviation Authority issued a rule allowing the use of drones for commercial purposes under certain conditions without a special waiver that was expensive and time-consuming to obtain and severely restricted their use.

The Business Research Company’s report shows that the civil and military drones manufacturing market segment will grow at an annual rate of more than 16% to 2021, the highest of all segments of the aircraft manufacturing industry. 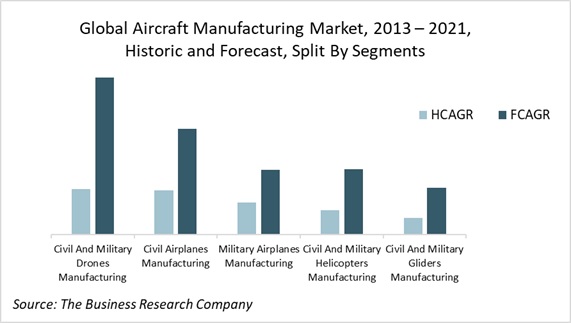 The demand for turboprops has also been increasing over the last few years as they are more fuel-efficient than other aircraft. What is a turboprop? Turboprop aircraft have one or more gas turbine engines connected to a gearbox that turns the propeller. They have lower operating costs than jets as they burn less fuel.

North America had the highest market share in the global aircraft and aircraft parts manufacturing and repair & maintenance market in 2017, at about 40% of the global total, followed by Asia Pacific at nearly 21%. This was due to the strong air travel market in North America in countries such as the USA and Canada, and the presence of major aircraft manufacturers such as Boeing, Lockheed Martin and Textron Inc. As of 2017, 305 turboprop aircraft were delivered to customers in North America, and in 2016 the government of the USA had 7,000 aerial drones.

In Asia Pacific, there is a large number of airlines that are expanding in the market, supported by the strong influx of air passengers from middle-class populations in China and India. As of 2017, 563 turboprop aircraft were delivered to customers in Asia-Pacific, and the government of China had 17 drone aircraft.

Aircraft and Aircraft Components Manufacturing and Repair Services Global Market Opportunities and Strategies from The Business Research Company is one of a new series of industry reports.

Extensive secondary research is augmented with exclusive insights and quotations from industry leaders obtained through interviews. Market analysis and forecasts are provided by a highly experienced and expert team of analysts and modelers. A range of strategies for the aircraft and components manufacturing and repair services market are explained and opportunities identified.