The State of the Medical Marijuana Market in 2020

Cannabis culture is not new and is not restricted to recreational purposes. The use of cannabis, a.k.a. marijuana, for medicinal purposes such as joint pain, muscle spasms, gout, spinal cord injury, and insomnia, dates back to as early as 5000 BC.

For centuries, all three forms of cannabis – cannabis sativa, cannabis indica and cannabis ruderalis — have been in use. However, they all differ in their potency; the latter one is rarely used because it is the least potent.

Moreover, CBD dampens the “high sensation” (produced when THC binds with cannabinoid 1 [CB1] receptors in the brain) by facilitating its self-binding with THC. However, the two have a similar kind of impact when used medicinally in addressing pain, fighting cancer, regulating seizures, healing bones, quickening recovery, calming down nerves, treating autism, addressing depression and many more such conditions; however, the use of CBD does not produce the euphoric effect as is the case in THC.

Where Is Medical Marijuana Legal?

The legality of marijuana has always been a subject of debate. Legal use of marijuana for medicinal and recreational purposes and its possession, cultivation or distribution varies among different countries. Several jurisdictions have banned the use of marijuana at several points of time, and the debate of legalization continues.

Different countries feel differently about the legalization of marijuana; consequentially, some have quasi-legalized the use of cannabis; some appear to be stalwart opponents such as Afghanistan, Albania, Algeria, Andorra, Armenia, Azerbaijan, Bahamas, Bahrain, Barbados, Belarus, Benin, Bhutan, Japan, and others. Some countries such as Argentina, Australia, Barbados, Canada, Chile, Colombia, Croatia, Cyprus, Germany, Greece, Ireland, Israel, Italy, Jamaica, Lithuania, Luxembourg, North Macedonia, Norway, the Netherlands, New Zealand, Peru, Portugal, Poland, Switzerland, Thailand, the United Kingdom, and Zambia, however, have legalized the medical use of cannabis. Similarly, in the United States, 33 states and the District of Columbia have green-lighted the medical use of marijuana; however, at the federal level, its use for any purpose remains prohibited.

To date, the FDA has not given marketing application to any of the cannabis drugs, and has put cannabis under Scheduled I drugs controlled under the Controlled Substances Act (CSA) attributed to the risk of high abuse. However, one cannabis-derived and three cannabis-related drugs are available in the market with a prescription from a licensed healthcare provider.

The FDA, in June 2018, approved the use of Epidiolex (GW Pharmaceuticals), a purified form of the drug substance CBD for the treatment of seizures associated with Lennox-Gastaut syndrome or Dravet syndrome, in patients two years of age and older. The European Commission (EC) approved the marketing authorization for Epidiolex recently in September 2019, for adjunctive therapy of seizures associated with Lennox–Gastautsyndrome (LGS) or Dravet syndrome (DS), in conjunction with clobazam, for patients two years of age and older.

Moreover, Marinol (AbbVie) and Syndros (Insys Therapeutics) having an active ingredient dronabinol, have also been approved for treating anorexia associated with weight loss in AIDS patients. In addition to this, Cesamet (Valeant Pharmaceuticals) is another approved drug that contains nabilone, another active ingredient in cannabis.

Although, cannabis remains the most popular and most extensively consumed illicit drug, the increase in an inclination of patients towards medical marijuana demands extensive research for its effective and safe use. To better prove the clinical effects of the cannabis, there are almost 400 active and completed clinical trials underway exploring the clinical efficiency of cannabis or cannabis-derived/related molecules in treating agitation related to dementia, hidradenitis suppurativa, cancer pain, neuropathic pain, dermatomyositis, systemic sclerosis, cystic fibrosis, systemic lupus erythematosus, drug-resistant epilepsy, glioblastoma, psoriasis, spasticity in patients with multiple sclerosis, obstructive sleep apnea (OSA) and tourette syndrome. 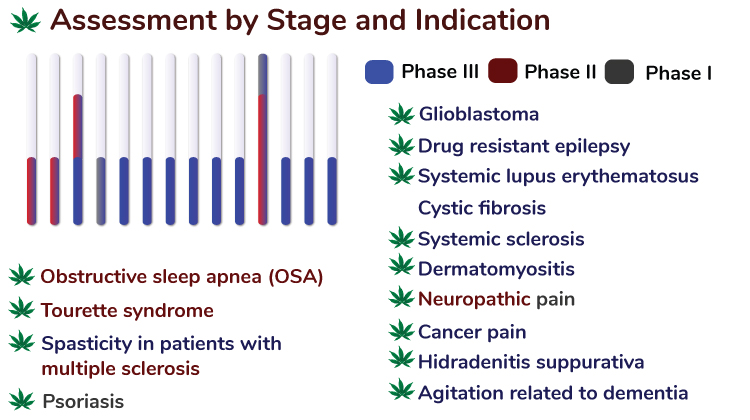 The approval from the regulatory agencies for cannabis-derived and related drugs have been sufficient enough to help push the demand further for the launch of further cannabis and cannabis-derived/related medicine in the world. Furthermore, legalization of the production, distribution and purchasing of marijuana, as well as easy availability of cannabis in countries like the US and Canada, has significantly impacted the growth of the cannabis industry.

A rich pipeline and an influx of companies shall further accelerate the growth of the cannabis industry. 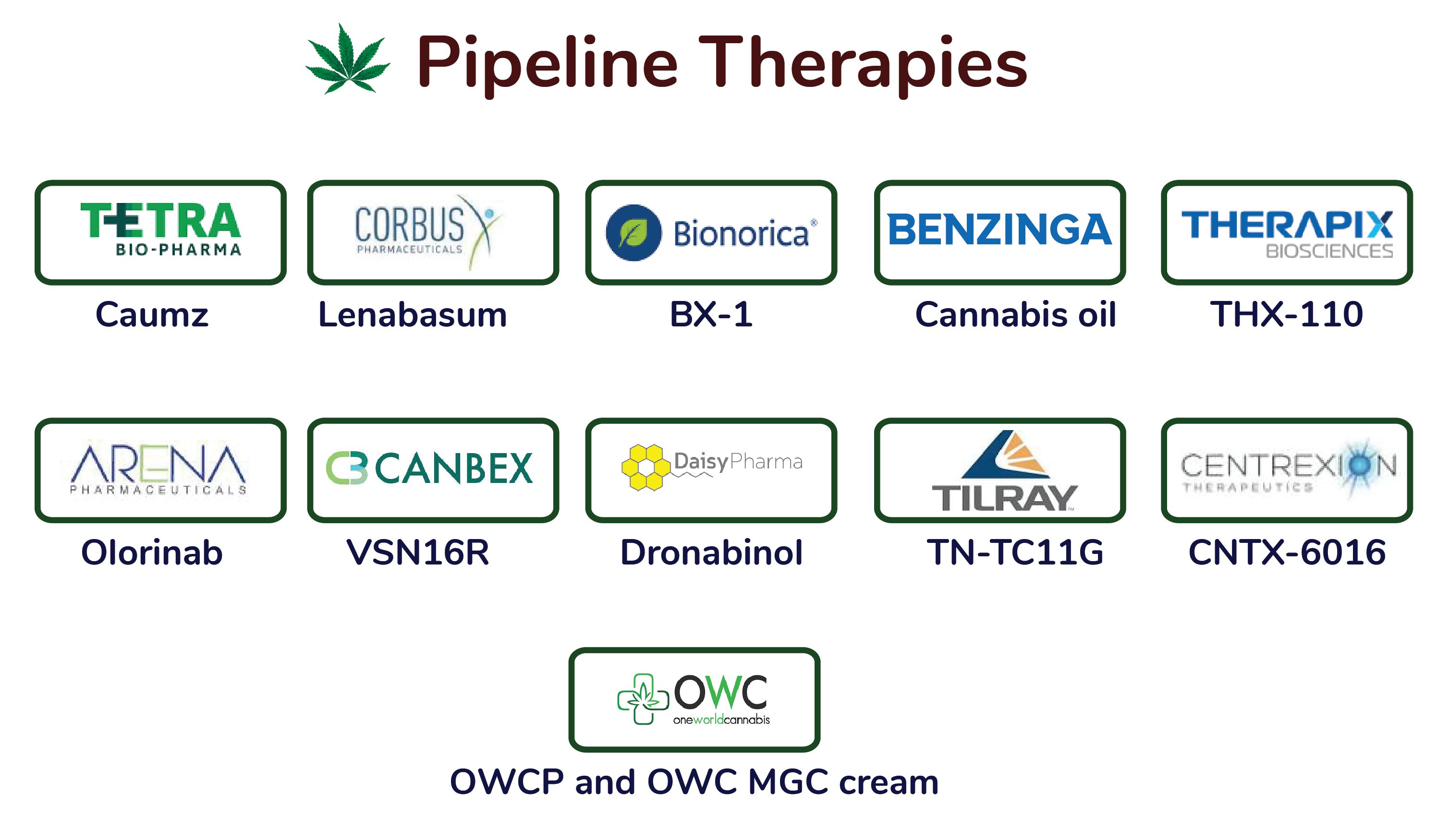 Furthermore, companies have started filing patents based on the positive future road ahead. Recently this year, Axim Biotechnologies, actively involved in targeting oncological and cannabinoid research, submitted for an application with the United States Patent and Trademark Office (USPTO) for a patent on water-soluble cannabinoid molecules.

Many other companies are collaborating and expanding their business in the medical marijuana market. Recently Canopy Growth announced the complete acquisition of global cannabinoid-based research company Beckley Canopy Therapeutics to ramp up the clinical research and facilitate patient access to safe cannabinoid-based medicines in the UK.

A few months back, Canopy’s rival, Aurora Cannabis, a Canada-based pharmaceutical invested in shaping the future of the medical sector with cannabis, also announced the acquisition of Reliva, a leader in the sale of hemp-derived CBD products in the United States for approximately USD 40 million of Aurora common shares.

The medical marijuana market has been experiencing a lot of activities that are accelerating its growth. Legalization of marijuana and its acceptance among people as a medical treatment, along with proactive R&D in the domain as well as the heightened interest of pharmaceutical companies has helped expedite market growth.

However, it is not wrong to say that the market growth can be hit by several snags such as the denial of land for cultivating cannabis by state governments, and the taboo associated with the use of marijuana. Moreover, the companies testing waters in the cannabis industry need to be cautious of the varying legal laws regarding the production and use of marijuana as medicine, ensuring stringent steps to prevent the potential abuse of medical marijuana.

For more comprehensive insights, see the report Medical Marijuana – Competitive Intelligence Analysis, 2019 by DelveInsight. A detailed picture of the competitive landscape is provided with summation of data from multiple sources with complete analysis of companies, patents, pipeline products, competitive benchmarking and therapeutic assessment of clinical products.