Are Consumers Expressing Their True Feelings About Brands in Market Research Studies?

As market researchers, we ask consumers how they perceive brands and products, and we accept their responses as a reflection of how they think and feel. But, how do we know that consumers are expressing their honest feelings about a brand? And, is there a way to test whether consumers’ expressed attitudes represent their true thoughts and feelings?

One popular method of measuring implicit thoughts is the Implicit Association Test (IAT) developed at Harvard University1, which has been used to detect prejudices toward specific genders, races, ages, political groups, etc. The underlying theory is that people will respond more quickly to words or concepts that are aligned with their true prejudices and that reaction times will provide insight into what people really believe. For example, researchers have identified that people who are prejudiced toward African Americans have faster reaction times to negative words that are paired with this race. This result has been replicated across numerous groups2.

At Beall Research, we wondered if the IAT could be used in market research, so we designed a quantitative study to test whether implicit thoughts toward brands are different than explicitly stated ones.

We developed a questionnaire to measure perceptions of nine well-known brands in the US. Brands were selected to represent a wide variety of categories. These brands were in the technology, durables, energy, beverage, online gaming, apparel, tobacco, and fast food categories. The 1,637 respondents in this study were representative of the US population.

We also used a version of the IAT, which paired brands with positive and negative words. The specific methodology is described in detail at the end of this paper.

To compare the results from the implicit and explicit measures, we conducted several analyses: 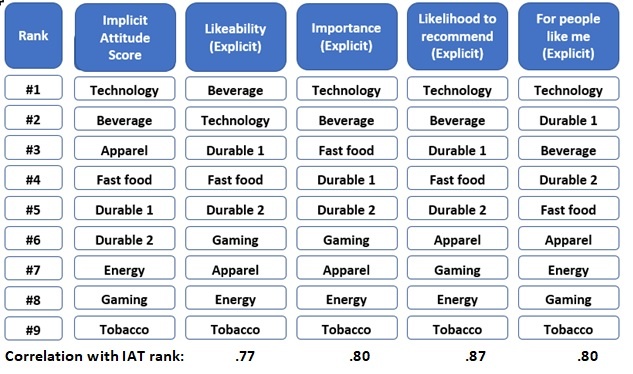 In this group of brands, the apparel brand is the biggest outlier; it is viewed more favorably implicitly than explicitly. This anomaly may be because consumers like the brand more than they are willing to say they do, or they think it’s a good brand, but it’s just not their style. Overall, however, the high degree of correlation suggests that the implicit and explicit measures are reflecting the same attitudes toward the brands.

These relationships are confirmed when we compare the mean scores, as shown below. The correlations between the mean IAT scores and mean explicit ratings are very strong, which indicates that respondents are answering the IAT exercise and rating questions similarly.

We adapted the IAT to measure consumers’ underlying attitudes toward several brands, and compared the results from that method to more traditional, explicit ratings of these brands. The goal of this analysis was to determine whether consumers’ implicit attitudes toward brands reveal biases or prejudices that aren’t measured with direct ratings.

The strong agreement between the IAT scores and the brand affinity measures indicates that consumers are willing to express their true attitudes and prejudices toward brands and that the IAT does not reveal anything more than what consumers already provided via their explicit evaluations that were expressed through numeric ratings. Brands that are broadly used and/or respected rank higher, and brands that are more controversial rank lower both in implicit and explicit measures. Therefore, we found that more traditional, explicit methods of evaluating brands are capturing consumers’ honest attitudes about brands. The IAT does not provide any great additional insight into consumers’ attitudes and beliefs about major consumer brands.

How the IAT Works

The IAT is administered online, as follows: 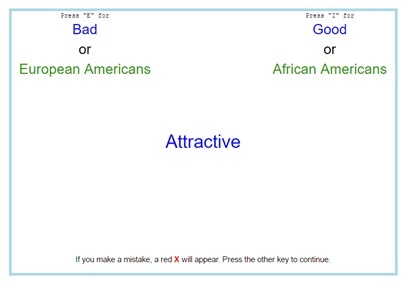 The result is that a person who is prejudiced against a particular group will respond more quickly to the combination of that group with negative words than with positive words. A person’s implicit attitudes toward each group is measured, both directionally (positive or negative) and in strength. The IAT’s validity has been demonstrated repeatedly in social science experiments 3,4,5. Thus, social scientists have learned that the IAT is effective at identifying a person’s prejudices, even when the person is unwilling to admit to those prejudices openly.

How We Used the IAT for This Research

In our IAT exercise, respondents were shown several screens (like the one below) with two brands randomly paired with the words “Positive” and “Negative,” and asked to match a series of positive words (e.g., trustworthy, innovative, high quality, etc.) and negative words (e.g., untrustworthy, outdated, low quality, etc.) with one of the brand and word pairs in the upper corners of the screen. The words “Positive” and “Negative” were then switched, so that whichever brand had initially been paired with “Positive” was then paired with “Negative” and vice-versa, and the exercise repeated. Scores based on the response times in the two exercises were calculated for each brand6. 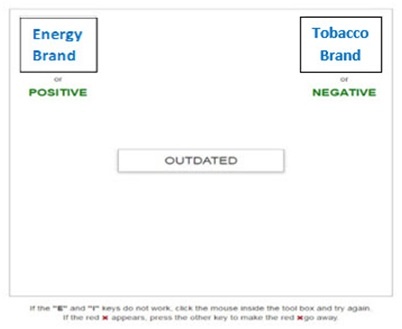 Beall is a boutique firm specializing in both qualitative and quantitative strategic market research. At Beall, we don’t just gather data; we use market research to answer the strategic questions that drive business decisions. We look at the world differently than most market researchers because we are psychologists, anthropologists, historians, economists, mathematicians, and sociologists. And we use theoretical backgrounds to frame insights that help solve real-world problems. As a result, we design and analyze research studies differently. Our insights drive major changes for organizations.