It’s that time of the year when both kids as well as adult “career enhancers” are heading back to school, but fewer and fewer students are turning to degree-granting for-profit institutions (eg, DeVry University and University of Phoenix) for their post-secondary education needs.

What occurred to produce such rapid growth and precipitous decline? 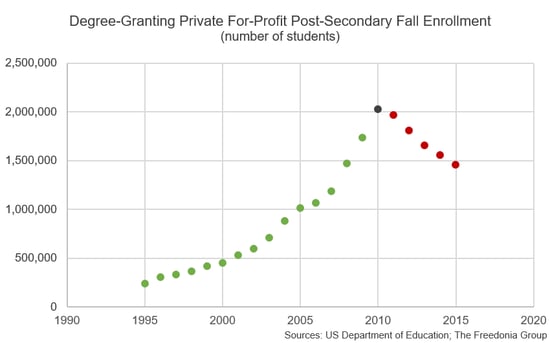 For-profit post-secondary institutions cannot control many of the factors that most impact enrollment levels, such as competition from public and nonprofit institutions, demographic and macroeconomic trends, and technological innovation. Going forward, the growth of for-profit institutions in the domestic market will depend largely on their internal capacity to reform marketing, recruitment, curriculum, and career development strategies in order to rebuild student trust over time.

For a complete report on personal spending on education by service for 2005-2015 with projections to 2020, as well as pertinent discussion of trends in demographics, international education, and regulatory factors, see Education: United States, a report published by the Freedonia Focus Reports division of The Freedonia Group.

About the Author: Matthew Rolfe is a Senior Market Analyst with Freedonia Focus Reports, a division of The Freedonia Group. He conducts research and writes a variety of Focus Reports, which offer concise overviews of market size, product segmentation, business trends, and more.