One element contributing to the global spread of Internet connectivity and usage is the growth of online gaming. Mobile games, in particular, are the fastest growing segment of the gaming market as smartphone and tablet owners are using their devices for game-playing on the Internet, increasingly more than desktops and consoles. Gaming through social networks is also taking up an increasing share of the total video gaming market. Both segments are expected to increase by around +20% annually, leading the growth in the overall online gaming market. 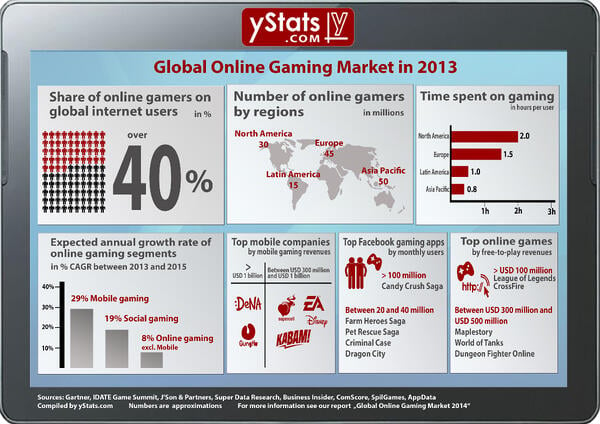 More than 40% of Internet users worldwide play games online, and the Asia Pacific region has the highest number of gamers on the globe. In Japan, the gaming market is dominated by local game publishers, though more foreign games are expected to be adapted by the country. Mobile gaming revenues on smartphones grew five-fold in the last two years, reaching a value well over a billion Euros. The social gaming market in Japan also saw the strong growth rates, with revenues outperforming mobile games.

In China, several hundreds of million people play online and mobile games, with the number growing every year. The share of mobile games on total online gaming revenues is expected to increase significantly in the next four years. Social gaming in China is also forecast to grow as well.

In South Korea, mobile gaming is a leading trend, led by a messaging app which transformed into a popular gaming platform. Mobile is forecast to be the fastest growing segment in the gaming industry in India also over the next few years, with revenues approaching the level of console gaming.

In the U.S. advanced online gaming market, gaming on mobile devices last year outpaced social gaming in popularity, a trend that is expected to persist. Mobile gaming was the largest segment in terms of revenue, accounting for around a quarter of the total market.

In Latin America, Brazil is by far the largest online gaming market, and growth of over 20% is expected there over the next few years. Over half of Internet users in Brazil now play online games, with the largest segment of gamers using mobile devices. In Mexico mobile was also the platform of choice for most online gamers, and the total video gaming market there reached a value of nearly a billion Euros last year. 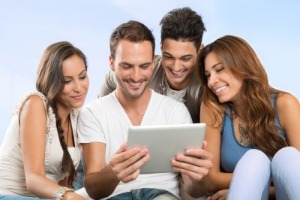 In Western Europe, the United Kingdom led spending rates on digital game content. Online gaming is a vast market in the UK, as nearly 20% of the population use the Internet to play video games. The mobile trend promises further growth of the market with half of all tablet owners using the device for game playing.

Germany was the leading country in Europe by monthly revenue per paying user. Downloads there generated the highest revenue on the online gaming market last year. Sales of games for mobile devices are also making a large contribution to gaming revenues. The most popular types of games played in Germany are strategy, casual and action games.

The emerging markets of Turkey and Poland were ahead of Western European countries in terms of the share of Internet users gaming last year. In Poland, computer games remain a major segment of the gaming market, but social, mobile games and online MMOs are catching up. In Turkey, over 20 million people play games online regularly, with social games being the largest contributors to this number.

In Russia, the online gaming market is booming, growing by over 20%, with MMO being the largest segment, followed by games on social networks. The number of mobile gamers in Russia is expected to increase annually to reach over 60 million by 2016, with around the same number playing online games on computers and consoles.

Gaming Revenues in South Africa are expected to grow by a small-double digit percentage between 2013 and 2017. Mobile gaming in South Africa far outperforms online gaming on other platforms. In other African countries, such as Ghana, Nigeria, Kenya and Senegal, online and mobile gaming is also gaining in popularity, with a small double-digit share of Internet users engaging in this activity on their mobile devices and PCs.

One fourth of Internet users in the UAE play or download video games or computer games online, almost double the share in 2010. Moreover, over 10% of mobile users in the UAE download games on their mobile device.