Salt – Not Just for Food 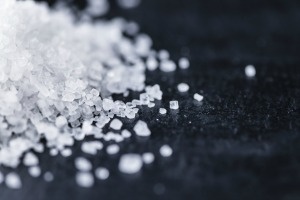 While food is historically known as one of the major uses for salt, the advent of chlorine and synthetic soda ash manufacture in the late nineteenth century and the use of salt for road deicing in the mid-twentieth century changed the importance of the food processing market.

Chemical manufacturing now is by far the largest outlet for salt, accounting for three-fifths of 2015 global consumption. Road deicing is the second largest share of world salt demand, followed by the food processing and livestock segments. Among other applications, water treatment and pharmaceutical manufacturing account for significant shares of salt consumption.

Salt represents the primary feedstock required for the production of chlorine and caustic soda (sodium hydroxide). These chemicals are produced by the electrolysis of brine — an electric current is passed through the solution — ionizing the sodium chloride and separating the sodium and chloride ions across an ion-selective membrane.

Chlorine is also important in the production of titanium dioxide (a pigment for paint), water treatment, and the bleaching of pulp and paper. Caustic soda also features a wide variety of end uses, including the manufacture of aluminum; pulp and paper bleaching; and the production of oils, soaps, and detergents. In addition, caustic soda is employed in the manufacture of paints, glass, and ceramics, and rayon, as well as in water treatment and textile bleaching.

The rising manufacture of aluminum fueled output of chlorine and caustic soda in the Africa/Mideast region during the 2010-2015 period, supported by increased construction spending and manufacturing activity in the area. Specifically, a bauxite mine and alumina refinery opened in Saudi Arabia in 2014, which consumes over 250,000 metric tons of domestically produced caustic soda annually.

In addition, the United Arab Emirates is constructing an alumina refinery with a yearly capacity of two million metric tons per annum. When it comes online (expected completion in 2018), it will require approximately 200,000 metric tons of caustic soda each year.

Find Out More About Salt