Fake News in a Real World: What It Means for Market Research 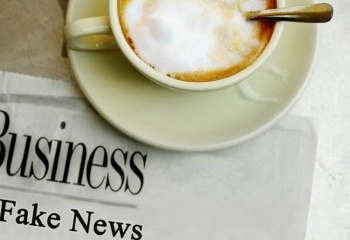 There is a famous New Yorker cartoon with one dog sitting in front of a desk-top computer telling another dog: “On the internet, nobody knows you’re a dog.”

And now 24 years later the problem of internet identity has moved from a punch line to the front lines of business, news, politics and commerce.

The sad truth is that in 2017 on a Google results page, we all look the same.

On the internet we don’t know if a world super power hacked an election, or as President Trump said, it could be “somebody sitting on their bed that weighs 400 pounds.”

On a Google results page, where many business decisions are made, an unsuspecting consumer doesn’t know if you are a PhD who spent 400 hours analyzing a market or a recent graduate putting together numbers from a press release.

In the world of the New Yorker and dogs trying to pick up cats, it’s humorous.

In a business where trustworthy information is the coin of the realm, it’s industry-altering.

Why do we all look alike?

Historically, one way to show you were a reputable company was to brag about your resume, highlighting the top companies you serve. In this new world you don’t need to really have them as clients; instead, you copy their logos from other websites and post them.

Another way to show you are reputable is to prove your US bona fides. But instead of having an actual office, now all you need is the address of an office share and suddenly you’re in Albany.

Another way to prove trustworthiness is a show of force on LinkedIn. Now these questionable firms post fake identities and histories with head shots of unsuspecting strangers.

Since 2001 MarketResearch.com has sold information for more than 1,000 publishers from around the world. We sought out new publishers and new titles and curated them in a way to help make buying expensive industry analysis easier. Our first tag line was “Helping you find the market research you need,” because we knew that nothing felt worse than buying a $5,000 study and not getting your question answered.

What is relevance in the age of Google?

Relevance used to be the best report that answered your business question. Now when a reputable publisher comes out with a report, a fake publisher can produce a slim volume with the same title a month later. When a business user searches Google, the more recent title often rises to the top.

When there is no apparent distinction between what is inside a report, all you can do is judge a book by its title.

As good data, or hard news, become watered down, client expectations change. When a news headline turns out to be inaccurate, people begin assuming all news must have something wrong with it.

We face the same challenge in the information space. We can suggest that a client buy a $5,000 study because it was written by an industry analyst who studied the market for 30 years and is an industry expert. But too often that same client opts for a less expensive report published by a new firm with no track record. When asked why, the client will use the dangerous phrase: “Well, good enough, is good enough.”

My response to that client is: Expect more. Ask questions. Don’t rely on a clever title and a well-crafted marketing email.

There is a way to conduct accurate research. Try reading a study on the US market for packaged goods that was written by a person who never stepped foot in a US grocery store, and the difference is painfully obvious.

Fake news and alternative facts, while a problem for our democracy, can be ferreted out by choosing where you get your information.

But when you need to make informed strategic business decisions, good enough is not good enough. In fact, it’s risky. You need accurate information from a reliable source.

About the Author: Robert Granader is Founder and CEO of MarketResearch.com, the largest retailer of industry research through its Profound, Knowledge Center, Academic, Focus and Custom platforms with a catalog of more than 1,000,000 reports.