Can China Become a Top Destination for Biologics Manufacturing?

Many have questioned whether China can move from "the world's factory” for consumer goods, electronics, and commodities, into technologically complex biologics.

However, the more relevant question is whether China can afford not to advance its healthcare segment. China is:

This is an opportunity for the developed world’s biologics manufacturers, suppliers, distributors, and regulators to take advantage of the high-growth potential of China's biologics industry. As domestic growth increasingly becomes an engine for its global biopharma emergence over the next 10 years, we point to just a few key data points from BioPlan's peer-reviewed study Advances in Biopharmaceutical Technology in China, 2nd Ed.

Just 7 or 8 years ago, few – if any – Western biologics manufacturers considered China a viable option for outsourcing production or services.  Intellectual property issues, lack of awareness, and expectations of poor quality were the norm.  That’s shifted dramatically, according to BioPlan's 15th Annual Report and Survey of Biopharmaceutical Manufacturing.

This past survey, BioPlan found that 25.4% of U.S. biopharma decision-makers now consider China to be a likely destination for outsourcing within the next in 5 years, with over 50% counting it as a possible destination. 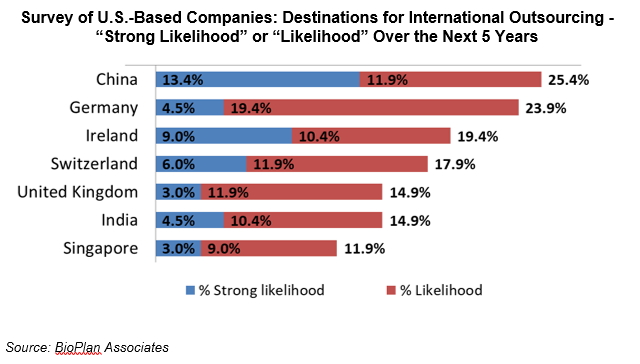 So although China biopharma at this point is mainly domestically directed, our research indicates that biomanufacturers in both China and in Western markets see a future where China is a viable partner, competitor, or supplier.

For a deeper dive into the Chinese biologics market, be sure to download Advances in Biopharmaceutical Technology in China, 2nd Ed, a co-publication between BioPlan and Society for Industrial Microbiology & Biotechnology.  The report provides an authoritative analysis of the biopharmaceutical industry, as well as the state of China's technology.

Click the button below to view the full report page.

About the Author: Eric Langer is a Managing Partner at BioPlan, a biotechnology and healthcare marketing research and strategic consulting firm, providing services since 1989.