Beyond the Coronavirus: China Pharma Market Set to Grow

Every news service globally is focused on COVID-19 (the “coronavirus”) and how it will affect the global population, but what of the Chinese health system itself? How does this sector operate during “normal” times? What will drive and restrain Chinese health markets?

These are some of the questions we have been looking at over the past 6 months.

According to our analysis, the Chinese pharmaceutical sector is set for substantial growth across the next decade as a growing middle class, which has greater access to healthcare, is expected to drive the domestic market significantly. A growing overall population, which is tilted towards the middle aged and elderly, is another factor that will boost Chinese healthcare and pharmaceutical markets.

Factors driving the China pharma market are detailed below. 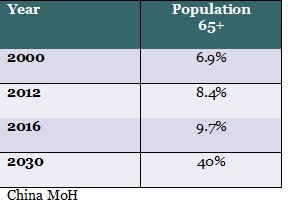 China has a large population of diabetics, with almost 1 in 3 diabetics in the world residing in China. By 2030, circa 25% of the world diabetic population, a total of 130 million, will be in China.

Many factors contribute to this growth of the Chinese diabetic population, such as increased urbanization and a more “Western” diet for much of this urban population. Hand in hand with diabetes is the increasing prevalence of obesity; today, 17% of the Chinese population is classed as obese.

Cardiovascular disease remains the number one cause of death in China, accounting for 40% of all mortalities.

Another factor is the prevalence of smoking; according to WHO figures, as of 2018, 26.6% of China’s population smoked (307.6 million adults). About 16.1% (50 million adults) of current smokers planned to or were thinking about quitting smoking in the next 12 months — equating to a significant sub market.

The Chinese government’s Healthy China 2030 reforms recognise the factors outlined above, and there has been an increase in “foreign” drugs that have been approved and included on insurance lists.

China is the largest supplier of raw materials for high-priced, non-generic drugs produced by the US, but overall, these materials account for a small portion of the total manufacturing cost. Chinese pharmaceuticals are thus in a relatively low position on the pharmaceutical sector value chain.

If, however, the US administration is keen to reduce its dependence on Chinese APIs, it will have to map out an entire supply chain of ingredients for generics and branded drugs from alternative sources and countries.

Many Chinese goods and services have been impacted by increased tariff rates by the US. Chinese pharmaceuticals face tariffs, and this is likely to strengthen the domestic (Chinese) pharmaceutical market in the short to mid-term.

China became a member of the International Council for Harmonization in 2017 and accepted declarations in clinical trials/ approvals by the US FDA and the EMA, shortening the clinical trial authorization processes significantly in China. There is still work to be done in harmonisation, but it is being recognised and worked upon.

So this mix of factors — a growing, more affluent population, closer regulatory harmonisation, foreign market entrance, etc. — is expected to drive the pharmaceutical market in China. There will of course be variables. Whilst there is the huge focus on COVID-19, this will likely disrupt the flow of raw pharmaceuticals products to the US. Only last week CNN covered the story “Coronavirus outbreak in China could lead to 'critical' shortages of medical products in the US.”

On the other hand, the outbreak will cause an uptick in domestic (China) sales of pharmaceutical products (both Rx and OTC), medical devices, and medical consumables, etc. It is a very interesting time for the Chinese pharmaceutical sector.

For more in-depth research, see the report The Chinese Pharmaceutical Market to 2030 by GMR Data Ltd.  With over 100 pages, and over 60+ charts, tables, figures and graphs, this dedicated specialist report will ensure you remain equipped and fully informed, to succeed in this competitive market.

About the Author: Simeon Pinder is a Senior Analyst at GMR Data Ltd, an independent publisher of business reports covering the pharma, energy, utilities & IT sectors.