The US Federal Drug Administration is aiming to cut the time-to-market and the development costs for new drugs. This will help drive the market for biologics — where over 1,000 drugs are currently under development — to 9.6% year-on-year growth from its recent rate of 5.4%.

Unlike small-molecule drugs that are manufactured through organic or inorganic chemical synthesis, biologics are manufactured by living cells. They are produced using recombinant DNA technology and are composed of sugars, proteins, nucleic acids or a combination of these substances.

Biologics are more complex, fragile and difficult to manufacture than small molecules. They cost more to bring to market than the $2 billion average to develop a new drug, despite a trend to outsource development to contract research organizations. 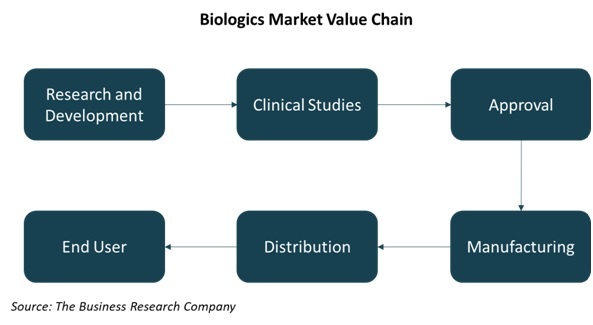 The changes being implemented or considered by the FDA include allowing organ-on-chip trials to be substituted for animal trials in the early stages of the process, allowing the inclusion of non-trial data from patients, and changing the end-point benchmark from proving that the drug extends overall survival to showing that it prolongs the time a patient lives without the disease getting worse.

Other changes include allowing biologics license applicants to obtain standard preparations for biologics (standard solutions containing a precisely known concentration of an element) from sources other than the FDA’s Center for Biologics Evaluation and Research, or to develop them internally. The FDA has also removed a rule (Section 610.21 of the FDA code) which specifies minimal potency limits to be met for certain antibodies and antigens. These changes will increase the rate of approvals in the world's largest biologics market, the USA, from its 2017 level of 12 new biologics. Furthermore, where the FDA leads, other regulators often follow.

Key Segments of the Biologics Market

Monoclonal antibodies (mAbs) are the largest segment of the biologics market, followed by therapeutic proteins and vaccines. All three segments are growing at over 9% year-on-year. 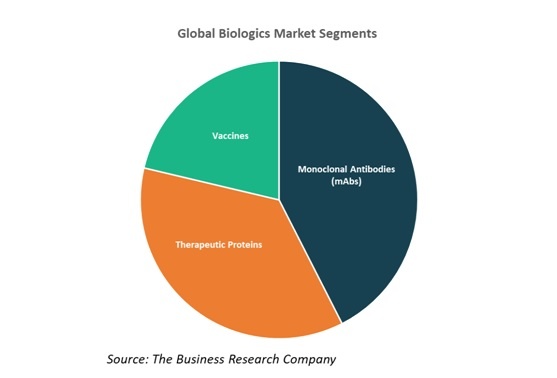 mAbs recognize and bind to a specific antigen that causes various chronic health conditions such as arthritis, cancer or multiple sclerosis. mAbs can be further segmented by source into murine mAbs, chimeric mAbs, human and humanized mAbs; humanized source mAbs are currently the largest segment.

Therapeutic proteins are engineered in the laboratory and work by targeting the therapeutic process which compensates for the deficiency of an essential protein. Therapeutic proteins include cytokines, peptide hormones and enzymes. Vaccines are biological preparations that stimulate the immune system and prepare it to fight future infections caused by pathogens. Biologic vaccines hold out hope for better treatment of viral infections and replacement of antibiotics.

The largest therapeutic area for treatment by biologics is the anti-cancer monoclonal antibodies segment, worth $47 billion a year, followed by the metabolic disorders area of the therapeutic proteins segment and the anti-infective area of the vaccines segment.

Drivers and Restraints in the Biologics Market

The therapeutic areas where the largest number of biologics are being developed are cancer, rare diseases, neurological disorders, autoimmune disorders, heart disease and stroke, diabetes, mental health disorders and Alzheimer's, in that order.

Many of these diseases are age-related or linked to life-style changes. Population-aging and increasingly affluent lifestyles are key drivers behind the growing prevalence of many of these conditions. Because they are growing most rapidly in developed economies, their treatment can command much higher prices than those for small-molecule drugs.

“Biologics are inherently much more expensive than most of the small molecules. And I think this will result in, maybe, some clinicians will move more towards less expensive small molecules and others will see the value of biologics and will continue on with new entries into the market.”
— Senior Medical Science Liaison, Bristol-Myers Squib

All segments of the pharma market are being challenged by the growth of generics. The threat from generics is currently lower in the biologics market than the small-molecule drug market, but is expected to increase. One reason is that the early generation of biologics is losing its patent protection. Again, governments around the world are encouraging biosimilars in their efforts to reduce healthcare costs. Biosimilars are pharmaceuticals that are developed to have similar properties to a biologic that has already been approved.

For example, in India, a new biosimilar policy called the "Guidelines on Similar Biologics," prepared by the Central Drugs Standard Control Organization (CSDCO), is expected to give a major boost to the Indian biosimilars industry, making it more competitive in the global market. In the EU, a pathway for approving biosimilar medicines has existed since 2003. These cheaper alternatives that compete with biologics discourage investment by limiting the time span over which the innovating companies can earn a return on their investment.

North America is the leading region for both biologic and other pharma sales, but the story is different in the second and third places. Asia Pacific has overtaken Western Europe in small-molecule drug sales but in biologics, Western Europe is still well ahead of Asia Pacific. The high cost of biologics, making them more affordable in affluent Western Europe, the greater prevalence there of the age-related diseases that many current biologics are designed to treat, and the more rapid growth of the biosimilars market in Asia Pacific account for this difference. 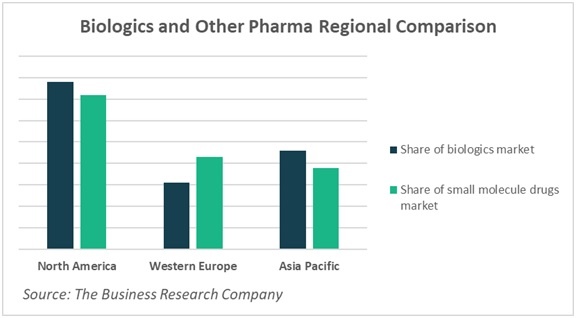 The USA's biologics market is by far the world's largest, worth seven times that of the second largest, Japan. Growth, however is widespread, with the BRICs (Brazil, Russia, India and China) in the lead. For instance, growth in India's tiny market has surged recently, from the 12.4% CAGR it was achieving up to 2017, to 21%. Growth has also accelerated in the European markets — the UK, France, Spain, Germany and Italy are all now seeing double-digit growth, as is the otherwise often somnolent market of Japan. Growth in the US market, though a little slower in percentages, is of course worth the most in dollars.

The global biologics market is fairly concentrated, with ten biologics companies accounting for over 80% of sales. The US's Johnson & Johnson is in the lead, closely followed by Swiss company Hoffman-La Roche. Bristol-Myers Squibb, Glaxo Smith-Kline and AbbVie Inc. are other key players.

Read the global biologics market report from The Business Research Company for information on the following:

Sourcing and Referencing: Data and analysis throughout the report are sourced using end notes.

Additional Articles by the Publisher