by The Business Research Company, on September 8, 2022 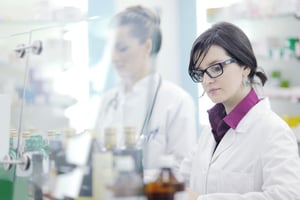 The increase in development of biologics (drugs made from living organisms) is driving the adoption of biosimilars, which is a cheaper alternative with the same efficacy when compared to biologics. Pharmaceutical companies are rapidly shifting towards originator biologics and competitive biosimilar drug development.

Pharmaceutical companies have historically focused on small molecules, but the rate of innovation in that field has slowed dramatically, leading to the shift towards biologics. In addition, growth in research and development (R&D) activities has led to increased success rates in clinical trials and new product launches. For instance, in April 2022, the US Food and Drug Administration (FDA) approved the Biologics License Application (BLA) from Amneal Pharmaceuticals, Inc. for bevacizumab-maly, a biosimilar referencing Avastin, the Roche/Genentech product. 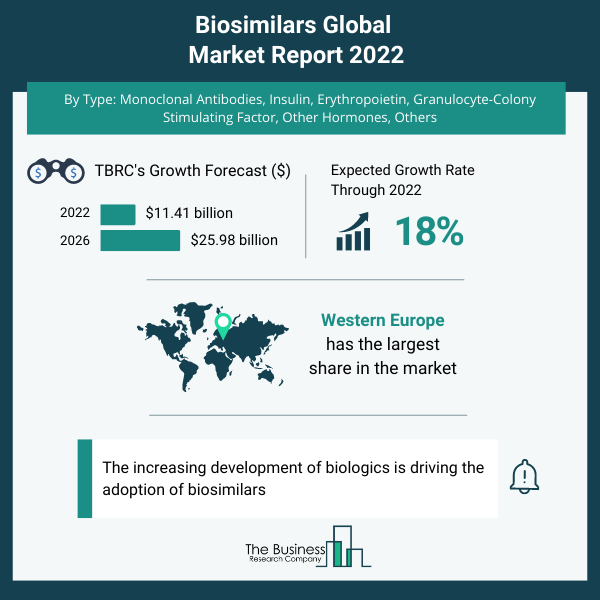 Western Europe Is the Largest Region in the Global Biosimillars Market

Western Europe was the largest region in the biosimilars market and was worth $7.53 billion in 2021. In terms of per capita consumption, the market accounted for $17.8, much higher than the global average.

The biosimilars market in Western Europe is supported by various initiatives. One such initiative is the priority medicines (PRIME) initiative, which is a scheme launched by the European Medicines Agency (EMA) to enhance support for the development of medicines that target an unmet medical need. A drug candidate selected for the scheme is provided benefits such as financial help, fee reductions, and guidance on marketing authorization. This market growth is also attributed to the large geriatric population, high healthcare expenditure, and government support for new research and development. For instance, in 2020, the UK government announced plans to invest £24 billion ($27.85 billion) per year in R&D by 2024–25 to support pharmaceutical companies to develop new medicines.

Amgen Inc. Held the Largest Share of the Biosimilars Market in 2021

Amgen Inc. was the largest competitor in the biosimilars market in 2021, with a 21.23% share of the market. Amgen’s growth strategy is to focus on strengthening its product portfolio through new product launches. For example, on June 6, 2022, Amgen announced that the FDA had approved RIABNITM (rituximab-arrx), a biosimilar to Rituxan®, in combination with methotrexate for adults with moderate to severely active rheumatoid arthritis (RA) who had an inadequate response to one or more tumor necrosis factor (TNF) antagonist therapies. RIABNI is already approved for the treatment of adult patients with Non-Hodgkin's Lymphoma (NHL), Chronic Lymphocytic Leukemia (CLL), Granulomatosis with Polyangiitis (GPA) (also called Wegener's Granulomatosis) and Microscopic Polyangiitis (MPA). Also in 2020, the company launched AVSOLA®, a biosimilar to Remicade® (infliximab).

The biosimilars market consists of sales of biological drugs and related services that are used to treat chronic diseases such as diabetes, arthritis, and cancer. A biosimilar, or biosimilar drug, is a medicine that is very close in structure and function to a patented biologic medicine. Biosimilars are manufactured using cell lines and have been shown not to have any clinically meaningful differences from the originator or reference medicine in terms of quality, safety, and efficacy. Biosimilars can normally only be authorized once the period of data exclusivity on the reference biological medicine has expired.

The Business Research Company is a market intelligence firm that excels in company, market, and consumer research. Located globally it has specialist consultants in a wide range of industries including manufacturing, healthcare, financial services, chemicals, and technology. Find the company on LinkedIn, Twitter, Facebook, or YouTube for more.