Years after the Great Recession, household growth in the U.S. is on the rise – and skewing heavily toward higher income families.  According to Affluent and High Net-Worth Americans, a recent white paper from Packaged Facts, post-recession household growth is most pronounced among affluent households, which grew by 90% from 2010 to 2019.

But who constitutes this moneyed segment of society? According to Packaged Facts, affluence is defined via the following household income thresholds:

When it comes to wealth, who owns it and who is gaining it can vary sharply by generation and race/ethnicity. Here are a few key demographic trends to keep an eye on when it comes to affluence in the U.S.

Baby Boomers - identified as individuals age 55-73 in 2019 - by far own the largest share of total household net worth in the U.S., with a 57% share. Per Packaged Facts data, that percentage has also remained relatively consistent, fluctuating no more than 4 points between 2010-2019. Generation X and the Silent Generation are a distant second and third, with 24% and 17% shares, respectively.

Will Baby Boomers see their piece of the household net worth pie shrink anytime soon?  According to some, possibly. One study projects that approximately 45 million U.S. households are set to pass on an unprecedented $68 trillion in wealth to their children over the next 25 years, with Generation X and Millennials serving as the main beneficiaries.

While Millennials are growing their affluence at a faster pace than other generations, they’ve got quite a bit of ground to make up otherwise, as the Packaged Facts ebook estimates that Millennials hold a mere 2% share of total affluent household net worth.

The financial plight of this demographic is well-documented. Slow wage growth, coupled with high housing, healthcare, and other costs – on top of an outsized student loan debt burden – have all worked in concert to reduce the degree of affluence Millennials might have otherwise attained. However, as this generation begins to grow its own wealth both organically and through inheritance, it should increase its share of the bounty in the coming years.

As unevenly as affluence is apportioned by generation, the distribution of wealth across the lines of race and ethnicity is even more unbalanced. Data from Packaged Facts estimates that though white families comprised just 65% of U.S. households in 2016, they held 87% of total household wealth. Check out the table below for more information. 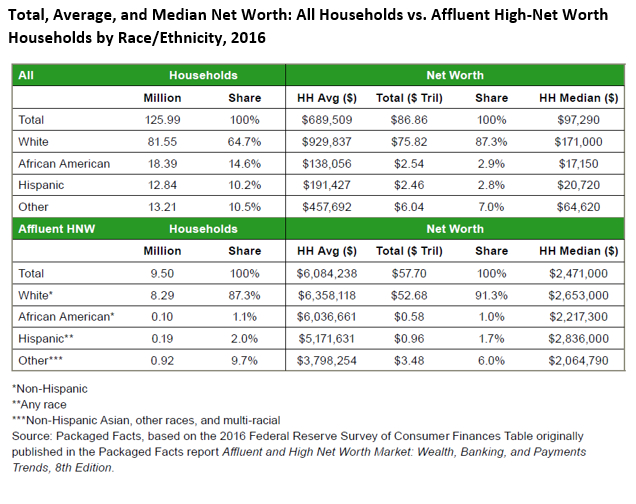 The ebook Affluent and High Net-Worth Americans features summaries of data from multiple titles in the Packaged Facts Collection, including: