Who Is the "iPad Generation?" 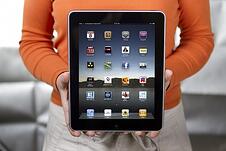 Introduced in April 2010, the iPad quickly zoomed to the top of the global electronics consumer market, and instantly earned millions of zealous users in America. Even the most jaded tech aficionados were mesmerized by the sleek, 1.5 pound, keyboard-free device. Thousands of Americans stampeded to Apple Stores coast to coast to purchase the iPad; more than 300,000 units were sold in the first few days of release.

In the years since, only the introduction of a few other tablet devices by other companies have dimmed the public's ardor for the iPad.  The debut iPad carried a price-tag of $499. That relatively pricey figure made the iPad an instant status symbol, a marker of user's affluence and early-adoption, tech-savoire faire.

At least, that  is the profile  that quickly became the stereotype of the "typical" iPad user. Later versions, including the iPad Mini, came with lower price-tags, but the air of the affluent and tech-savvy user continues to float around the iPad and it's adherents.

Who is the "Typical" iPad User? Not Exactly Who You Might Think

Now, there are indications that an iPad 5 may soon be hitting the shelves, so it is worth asking few questions about the "iPad Generation," such as:

A new comprehensive market research report examines these questions, and provides new data about iPad users. The report arrives at an interesting time within the short, eventful history of the iPad: Competing technology companies, in particular Microsoft, have since 2010 launched tablets that are gaining foothold  in the global consumer electronics marketplace, and in the cultural fabric.

On May 6, Bill Gates, Chairman of Microsoft, told an interviewer that he believed consumers were becoming "disappointed" in the iPad, specifically, unhappy with its absence of a document-creation function and keyboard.

Corporate gamesmanship aside, the new independent report, The iPad and its Owner: Key Trends and Statistics, 2013, looks at iPad users in-depth.

As Apple showed by cutting the price of the entry-level $499 iPad 2 down to a more reasonable $399 (and in October of 2012 rolled out a still-cheaper iPad Mini that starts at $329), the devices are getting cheaper, which means a key barrier to purchase is being lowered.

Other Key Findings of the iPad User & Trends Report

The diversity of users shows that the iPad's cultural influence is wide, and that it has created ripples throughout other media industries.

For example, the popularity of the iPad (which allows users to download eBooks) has affected the book industry. An estimated 250,000 eBooks, including free ones, were downloaded the first day of the iPad’s launch date.

To a moderate degree, the iPad also has changed the way that media companies now present digital content. News organizations scrambling to keep their content in front of audiences have learned to build web platforms that present their words and videos in "optimized" formats that display well on the iPad.

Another intriguing statistic is revealed in the report:  68.7% of iPad users are married, while 31.3 percent of users are not currently married.

To learn how you can use social media (and your ipad!) for market research, download our free white paper.