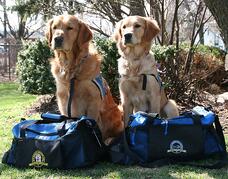 In the aftermath earlier this month of the Boston Marathon bombings and a huge factory explosion in Texas that left a nation dazed and confused, some Americans are finding solace in the embrace of helping paws.

ABC News reported on this phenomenon, dubbing it "Puppy Love Healing" in reference to a group of specially trained-golden retrievers provided to people in the communities of Boston, Massachusetts following the April 15 bombings during the Boston Marathon, to offer "cuddle comfort" for those in need (see the video here). The popularity of the "Puppy Love Healing" campaign is so great that some of the dogs associated with it even have their own Twitter accounts.

Packaged Facts' March 2012 Pet Owner Survey reveals that 84 percent of respondents agree that their pets have a positive impact on their emotional health, while 77 percent agree their pets positively impact their physical health. The fact that comfort dogs are such a visible part of the healing process following one of the most sinister assaults on U.S. soil since 9/11 speaks to how widely embraced the idea of pet therapy has become.

Pet industry experts--including those at Packaged Facts--have championed the game-changing long-term impact of pet therapy for several years, though 2009 marked a noticeable uptick in optimism surrounding the implications of the trend.

The basis for this optimism was the belief that the correlation between pet ownership and enhanced human health would continue to receive scientific support through clinical trials and become more publicly known, which would thus create a boon for the retail pet industry overall.

Advances in the social acceptance of modern-day principles of pet therapy can partly be linked to the WALTHAM Centre for Pet Nutrition committing $2 million to a four-year research program in a joint effort with the Eunice Kennedy Shriver National Institute of Child Health and Human Development (NICHD) for Human-Animal Interaction (HAI) in August 2009.

Even Average Janes and Joes not in league with either big corporations or acronym employing associations have taken up the cause of gaining wider acceptance for pet thearpy. A self-described "edgy, twenty-something New Yorker,"  Bruce Goldstein published a boy-meets-dog memoir entitled "Puppy Chow Is Better Than Prozac: The True Story of a Man and the Dog Who Saved His Life," in March 2008.

Goldstein's candidness about his personal struggles and the role his pet played in helping him triumph in life resonated with many Americans. It will be interesting to see what testimonial books--and blogs--discussing how "Puppy Love Healing" brought them through the storm arise from the ashes of the recent major disasters in Boston and in West, Texas.

For more information on how the pet industry connects with consumers, download our free eBook.