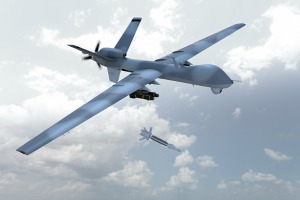 Unmanned aircraft systems, popularly known as drones, offer a sequence of advantages such as considerable reductions in size, weight, and cost, enhanced battery life, and increased degree of autonomy in operation.

Additionally, drones have been adopted across the globe for various applications such as:

Due to all these benefits, the unmanned aircraft systems industry has been seeing rapid growth over the last few years.

Security Threats Related to the Rise of Drones

On the flip side, however, the ease in availability of such drones (or unmanned aircraft systems) has also given rise to malicious usage.

The extensive development and use of drones and unwarranted incidents have resulted in the necessity for counter UAV technology or anti-drone systems that neutralize rogue drones.

The development of hundreds of counter-UAS is in progress all around the world due to multiple investments in this attractive industry. The countries that are spending on counter-UAS programs include the U.S., the U.K., Australia, and Germany, among others.

The global counter-UAS (anti-drone) market is estimated to reach $6.44 billion in 2031, at a compound annual growth rate (CAGR) of 15.18% during the forecast period 2021-2031. The major driving factor for the market's robustness is the need to monitor and maintain the growing number of satellites launched in the Lower Earth Orbit (LEO).

Increasing security concerns from unauthorized air systems, both, within the commercial and military industries, have led to a rapid growth of the counter-UAS market.

Over the past few years, several such incidences of security breaches by unauthorized unmanned vehicles (UAVs) have mushroomed globally. Additionally, the rise in terrorism and other illegal activities has escalated the necessity for a stronger and stringent counter-UAS ecosystem.

Currently, there are about one million drones registered with the Federal Aviation Administration (FAA), and the number is increasing day by day. With a huge number of drones in the air, efficient detection systems can play a great role in alleviating potential risks associated with drone usage.

The initial adopters of counter-UAS technologies have been defense organizations; the C-UAV systems are now being installed at the critical infrastructure around the world. The tools and techniques used by militaries, defense organizations, and police include GPS spoofing, drone nets, RF jammer guns, among others, in the anti-drone system.

While counter-UAVs have garnered interest and popularity globally, they are still in their early days in terms of bulk adoption and usage. The need of the hour for nations all over is to chart out specific budgets for counter-UAS technology that would help penetrate through certain areas where the industry has been deficient.

When it comes to using anti-drone systems, there are certain regulations that need to be taken into consideration. The FAA does not give permission to use counter-drone technology by anyone other than federal departments with explicit authority to use this technology.

Market Segmentation of the Counter-UAS Market

In terms of its application, the counter-UAS (anti-drone) market is most in demand by the defense as the end-user segment. This is largely based on the reason for the deployment of anti-drone solutions at military bases.

In addition to this, the application of the counter-UAS market is substantial in the commercial as well as the homeland security segment as well.

The products segment for the counter-UAS (anti-drone) market is diverged into two main categories;

Anti-drone systems are used in several technologies for detection and interdiction purposes. These include radiofrequency, radar, destroyers, jamming, spoofing, hacking, and more. In fact, the detection segment is anticipated to dominate the global counter-UAS (anti-drone) market.

The factor contributing to this growth is the development of counter-UAS technology, which is specifically designed to track and intercept drones.

On the other hand, ground-based, air-based, and handheld are the three main platform types for the counter-UAS’s market segmentation as a product. In this, the ground-based segment is expected to lead the counter-UAS (anti-drone) market.

One of the factors contributing to this growth is the development of C-UAS technology, which is ground-based. Some of the ground-based C-UAS technologies include DroneSentinel, DroneTracker, Drone Guard, Giraffe 1x, and High Energy Laser Mobile Demonstrator.

The factor attributing to the growth of this region is the presence of the key companies highly engaged in developing and providing counter-UAS (anti-drone) solutions. Additionally, the continuous technology advancement by key players in the counter-drone technologies is another factor contributing to the growth of the market. Apart from this, the region’s companies are in long-term relationships with military organizations and other commercial counter-drone technology players, which is expected to propel the space sector in the region.