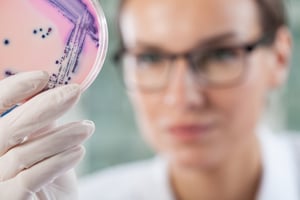 The bio-manufacturing of recombinant proteins requires robust processes that can maximize protein yield from mammalian cell cultures while ensuring the efficacy of these proteins as human therapeutics. Recombinant protein production using mammalian cells offers several advantages over microbial systems in the expression of Escherichia coli.

Escherichia coli (E. coli) is a bacterial type that is normally located in human intestines and animal guts. It is mostly harmless and helps in keeping the digestive tract healthy. However, some issues may occur, such as diarrhea, if contaminated food or foul water is consumed.

Theoretically, the steps for obtaining a recombinant protein are quite simple. These involve taking the gene of interest, cloning it in the expression vector that has been at its disposal, transforming it into the host of choice, inducing it, and then, the protein is ready for purification and characterization.

However, poor growth of the host, inclusion body (IB) formation, protein inactivity, and unavailability of protein are some of the major challenges that come forward down the pipeline of recombinant protein production.

The E. coli expression vector possesses the same features as those of other vectors, such as selection marker (e.g., antibiotic resistance), the origin of replication, transcriptional promoter, 5′ untranslated regions (5′UTR), and translation initiation site.

A few E. coli strains, such as BL21 and its derivatives, are widely used in recombinant protein production. These strains are efficient in increasing protein stability, containing a chromosomal copy of the T7 ribonucleic acid (T7 RNA) polymerase gene for simple and efficient expression of genes under the control of the T7 promoter.

Even after selecting the plasmid and host, it cannot be predicted if the protein will be obtained in high amounts and in a soluble active form or not. The major limitation of using E. coli for protein expression is its lack of available machinery for post-translational modifications.

In E. coli, phosphorylation of the targeted molecule (a mouse or human protein) has been achieved by coexpression with human Jun N-terminal kinase 1. Along with it, protein glycosylation is also a major post-translational modification that affects protein stability, distribution, and function.

Although bacterial N-glycans structurally differ from their eukaryotic counterparts, E. coli enables the production of recombinant glycoproteins in bacteria. Recombinant proteins can be ubiquitinated in E. coli by co-overexpressing the target protein, ubiquitin, and ubiquitin ligases. Therefore, by expressing genes related to the modifications of interest, the targeted proteins can be post-translationally modified in E. coli expression systems.

In the process of recombinant protein production, cloning methods have been rapidly advancing and can be performed with high efficiency, fidelity, and reliability at a reasonably lower cost. To meet the requirement of developing a highly flexible expression vector, an optimal vector must contain a strong but tuneable promoter and tags with optimized N-terminal codons to facilitate protein expression, solubility, and purification. Large N-terminal tags are also being used to enhance translational initiation and promote solubility. Moreover, new tags are being developed for considerable improvement in protein production.

Potential strategies to engineer a robust, high-producing cell line growing in a chemically defined media can maximize the production of recombinant proteins with the right glycosylation qualities. E. coli is a suitable host for expressing stably folded, globular proteins from prokaryotes and eukaryotes. Protein expression and purification in E. coli have begun to revolutionize studies in various research fields.