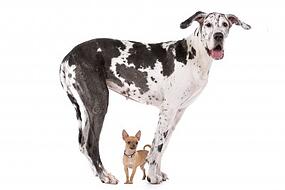 There was a time not very long ago when owning a Supersized product was a sign of prosperity in this country. It was virtually our birthright as Americans to eat Supersized fast food meals, drive oversized gas-guzzling cars, and park them in the driveways of our castle-sized mini-mansions.

For the pet industry, even our canine companions were larger during this grand, pre-recession era (circa 2008), where affluence abounded, at least for some.  Back then, our dogs were beasts worthy of legend. Owning a large dog was often a statement, especially for men. It screamed, I’m Paul Bunyan and this here is Babe the Blue Ox. These big dogs were our best friends and our protectors.

But things are different now.

The Scooby Doo theme song used to ask, “Scooby Dooby Doo, where are you?”  Evidently the answer in regard to large dogs in 2013 is more than likely to be, “not in the average American home.”

This is the era of the purse-sized dog.

Part of me wants to put the blame for this Titanic shift away from Titanic dogs squarely on the pampered shoulders of celebrity socialites toting tiny dogs as handbag accessories. But in truth, our nation’s continuing economic slump has  done far more to doom the ownership rates of large dog breeds than any efforts by celebrity gossip and entertainment news outlets ever could. And even though the U.S. dog population is growing in sheer numbers post-recession, it’s also getting smaller in other ways.

In terms of size, U.S. pet owners are increasingly favoring smaller dogs, whose share of dog-owning households rose between 2000 and 2010, according to recent findings by market research publisher Packaged Facts on the U.S. pet industry. This growth came mainly at the expense of medium dogs. For the first time in 2010, there were as many households in the U.S. with small dogs as there were with large dogs, and far fewer medium dog households.

Even with the worst of the recession a fading memory, it’s quite likely that the shift to smaller dogs will continue in the years ahead, with the aging human population as a key driver. For older pet owners, smaller dogs can be much easier to manage, being lighter to lift and requiring less outdoor time.

As Americans age, and their living situations change, smaller pets are more easily admissible to apartments and other group dwellings, including assisted living communities. Also favoring the smaller dog shift are preferences among younger pet owners, along with increased urbanization and apartment/condo ownership. In addition, for pet owners young and old alike, smaller dogs are easier to travel with and care for in vacation environments.

The shift to smaller dogs could have numerous ramifications for the U.S. pet market. Since smaller dogs eat less, pet food marketers may find it even harder to buck up volume sales. At the same time, size- and breed-specific foods should help to pick up any dollar slack, an angle brands like Mars’ Cesar and Royal Canin have been working successfully for many years.

Want more information about the pet market? Be sure to check out a free downloadable presentation on the top pet companies in the U.S.

**Note: Percentages add up to more than 100% due to multiple-dog ownership.
Source: Packaged Facts, based on February-March 2012 proprietary survey.